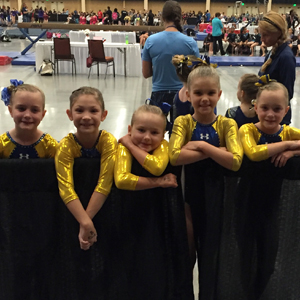 The Ladies of Precision had an outstanding performance at the Xcel Regional Competition in Pigeon Forge, TN!

Hayden Rector scored a season high on Beam for the Bronze Team with a 9.5. Way to go Hayden!

Silvers DOMINATED the competition! Brylee Jones and Camryn Clark both took 1st on Bars with a 9.775 and a 9.750. Silvers continued to score big on Bars as Maresa Beheler scored a 9.6, Anzlee Kilby scored a 9.550, Madelyn Russell scored a 9.5, and Madi Ross scored a 9.325. Camryn Russell swept the competition away with a 9.4 on Vault making herself the Silver Vault Champion and with a score of 37.675 she claimed the Silver All-Around Champion title!

Our Gold girls also had a very impressive performance. Chloe Jones scored a team high of 9.375 on Vault. Eleni Fiore led the Gold Team on Bars with a 9.425. Brooklyn Fields scored a 9.450 on beam placing herself in the 1st place spot and received the Beam Champion title. Kaitlyn Spangler scored a 9.250 on Beam and also won the Beam Champion title. Addison Secrest took 1st place on the floor with a 9.525 and Clare Coker scored big receiving a 9.225 with her “Wizard of Oz” floor routine!

We are so proud of these girls for all of their hard work this season! Congratulations!!!